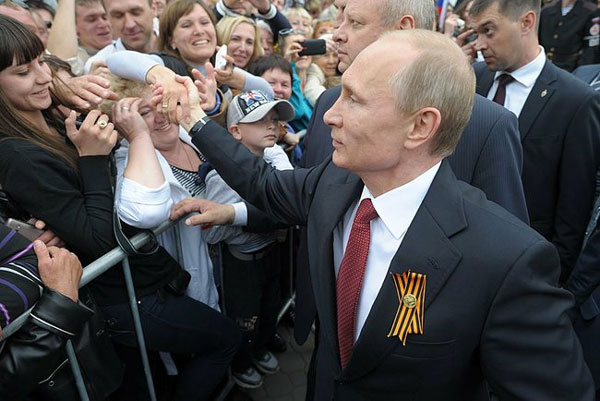 Congratulations, US media! You’ve just covered your first press conference of an authoritarian leader with a massive ego and a deep disdain for your trade and everything you hold dear. We in Russia have been doing it for 12 years now — with a short hiatus when our leader wasn’t technically our leader — so quite a few things during Donald Trump’s press conference rang my bells. Not just mine, in fact — read this excellent round-up in The Moscow Times.

Vladimir Putin’s annual pressers are supposed to be the media event of the year. They are normally held in late December, around Western Christmas time (we Orthodox Christians celebrate Christmas two weeks later and it’s not a big deal, unlike New Year’s Eve). Which probably explains why Putin’s pressers don’t get much coverage outside of Russia, except in a relatively narrow niche of Russia-watchers. Putin’s pressers are televised live across all Russian TV channels, attended by all kinds of media — federal news agencies, small local publications and foreign reporters based in Moscow — and are supposed to overshadow every other event in Russia or abroad.

These things are carefully choreographed, typically last no less than four hours, and Putin always comes off as an omniscient and benevolent leader tending to a flock of unruly but adoring children. Given that Putin is probably a role model for Trump, it’s no surprise that he’s apparently taking a page from Putin’s playbook. I have some observations to share with my American colleagues. You’re in this for at least another four years, and you’ll be dealing with things Russian journalists have endured for almost two decades now. I’m talking about Putin here, but see if you can apply any of the below to your own leader.

Facts don’t matter. You can’t hurt this man with facts or reason. He’ll always outmaneuver you. He’ll always wriggle out of whatever carefully crafted verbal trap you lay for him. Whatever he says, you won’t be able to challenge him. He always comes with a bag of meaningless factoids (Putin likes to drown questions he doesn’t like in dull, unverifiable stats, figures and percentages), platitudes, false moral equivalences and straight, undiluted bullshit. He knows it’s a one-way communication, not an interview. You can’t follow up on your questions or challenge him. So he can throw whatever he wants at you in response, and you’ll just have to swallow it. Some journalists will try to preempt this by asking two questions at once, against the protests of their colleagues also vying for attention, but that also won’t work: he’ll answer the one he thinks is easier, and ignore the other. Others will use this opportunity to go on a long, rambling statement vaguely disguised as a question, but that’s also bad tactics. Non-questions invite non-answers. He’ll mock you for your nervous stuttering and if you’re raising a serious issue, respond with a vague, non-committal statement (“Mr President, what about these horrible human rights abuses in our country?” “Thank you, Miss. This is indeed a very serious issue. Everybody must respect the law. And by the way, don’t human rights abuses happen in other countries as well? Next question please”).

But your colleagues are there to help you, right? After all, you’re all in this together?

These people are not your partners or brothers in arms. They are your rivals in a fiercely competitive, crashing market and right now the only currency in this market is whatever that man on the stage says. Whoever is lucky to ask a question and be the first to transmit the answer to the outside world wins. Don’t expect any solidarity or support from them. If your question is stonewalled/mocked down/ignored, don’t expect a rival publication to pick up the banner and follow up on your behalf. It’s in this man’s best interests to pit you against each other, fighting over artificial scarcities like room space, mic time or, of course, his attention. It’s getting especially absurd because some — increasingly many — reporters will now come with large, bright placards aimed at attracting the president’s attention to names of their regions or specific issues. This is what it looks like:

Also, some people in the room aren’t really there to ask questions.

A mainstay of Putin’s press conferences is, of course, softball questions. Which also happen to be Putin’s favorites. Mr President, is there love in your heart? Who you will be celebrating New Year’s Eve with? What’s your favorite food? “Questions” of this sort, sure to melt Putin’s heart, typically come from women working for small regional publications. A subtype of this is also statements-as-questions, but from people who really love the man on the stage and will bob their head and look at the stage adoringly and say something to the tune of “Mr President, do you agree that a lot of media are treating you unfairly?”

Also, some of these people really love him and will meet his every answer with enthusiastic applause. There will be people from publications that exist for no other reason than heaping fawning praise on him and attacking his enemies. But there will also be one token critic who will be allowed to ask a “sharp” question, only to be drowned in a copious amount of bullshit, and the man on the stage will always be the winner (“See? I respect the media and free speech”).

This man owns you. He understands perfectly well that he is the news. You can’t ignore him. You’re always playing by his rules — which he can change at any time without any notice. You can’t — in Putin’s case — campaign to vote him out of office. Your readership is dwindling because ad budgets are shrinking — while his ratings are soaring, and if you want to keep your publication afloat, you’ll have to report on everything that man says as soon as he says it, without any analysis or fact-checking, because 1) his fans will not care if he lies to their faces; 2) while you’re busy picking his lies apart, he’ll spit out another mountain of bullshit and you’ll be buried under it.

I could go on and on, but I think at this point you see where this is heading. See if any of this rings any bells if you covered Trump’s presser or watched it online.

P.S. You’re welcome to repost/reblog/republish this if you like.

My name is Alexey Kovalev, I’m a Russian journalist and I’m writing about propaganda, fake news and Russian state media on noodleremover.news. It’s all in Russian, but here’s an example of what I’m doing in English. You can contact me at kovalever@gmail.com. I tweet as @Alexey__Kovalev.